According to this March 14th, 2017 story from Popular Mechanics, “There Never Was A Secret Nazi Base In Antarctica”. Vice’s Motherboard ‘doubled down’ on that proclamation in a March 2017 story called “Fake News About A Secret Nazi UFO Base In Antarctica Refuses To Die” which claimed any kind of a ‘secret Nazi base’ in Antarctica is purely ‘fake news’. And while the Santa Monica Observer recently called the ‘secret Nazi base’ in Antarctica the 5th ranked ‘fake news story’ of 2016 we have to ask, who made globalist mouthpieces the final determiner of truth from falsehood? 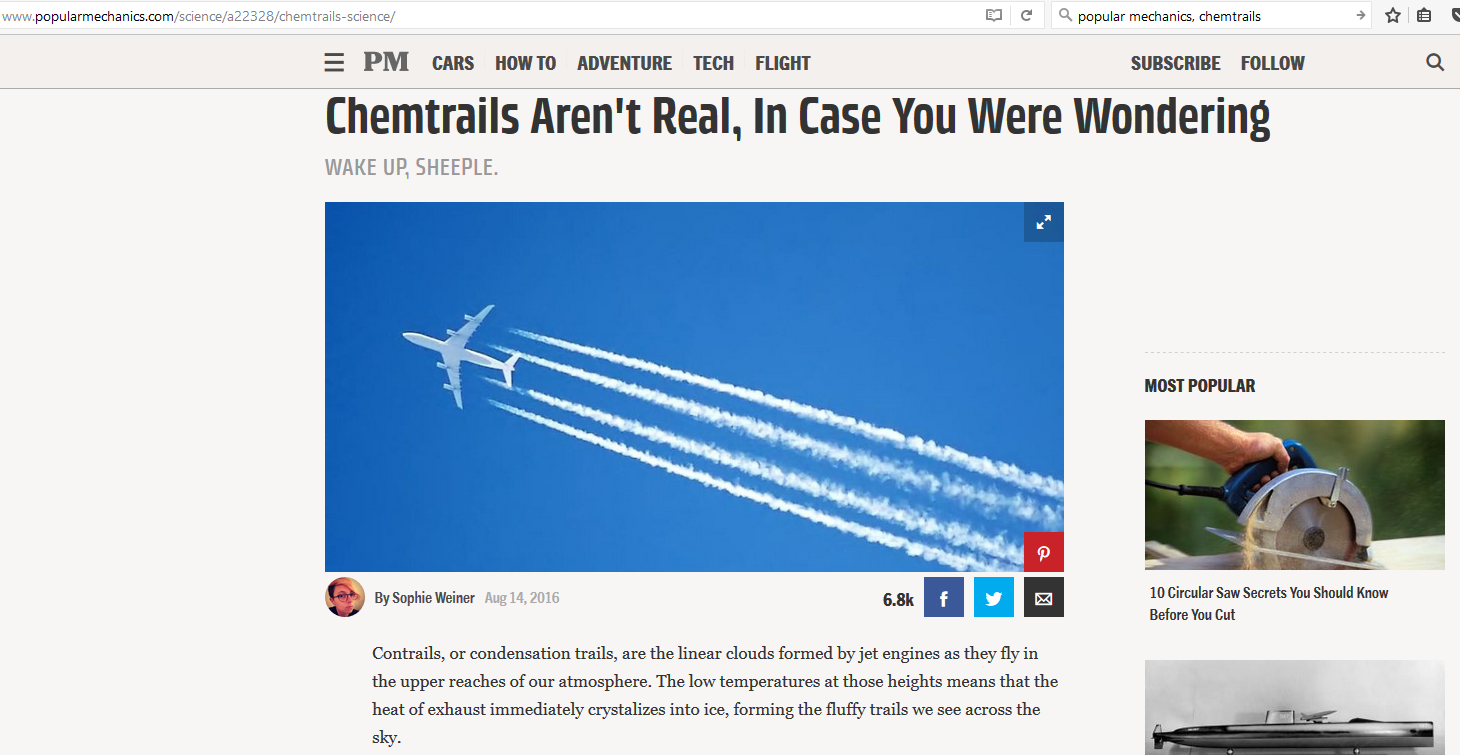 Between 1901 and 1938, the nation of Germany made 3 major expeditions to Antarctica with the 3rd one in 1938-39 establishing ‘New Swabia’, an unrecognized Antarctic claim of Nazi Germany. According to Wikipedia, one of the goals of the final expedition was to establish a submarine base in Antarctica and while New Swabia was alleged to have existed at least until the surrender of Germany in 1945, as we see documented in this story, a far greater mystery emerged.

As Wikipedia documents, during the Nazi’s return trip to Germany in 1939, the expedition stopped to make oceanographic studies near an uninhabited and mysterious island called ‘Bouvet Island’. More than 70 years later, STILL uninhabited Bouvet Island sits at the southern end of the Mid-Atlantic Ridge where it is considered to be the most remote island in the world. Yet despite being uninhabited, Bouvet Island is the home to a top-level internet domain code, .BV, and as we see in this story and hear in the videos below, Bouvet Island is also in the general vicinity of several recent and long-time unsolved mysteries.

According to this 2012 story from Sputnik News that was picked up days later by the Washington Post they reported that all the way back in 1943, Germany’s Grand Admiral Karl Dönitz was quoted as saying: “Germany’s submarine fleet is proud that it created an unassailable fortress for the Fuehrer on the other end of the world, in Antarctica”. Donitz took over as leader of Germany after the ‘alleged death’ of Hitler and, according to Wikipedia, had played a major role in the naval history of World War II. 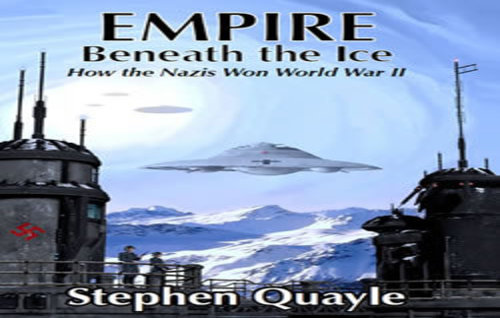 We also know as fact that just years later, Rear Admiral Richard E. Byrd led Operation Highjump (‘officially’ a US Navy Antarctic development program) to Antarctica and while we know we’ll never get the full truth about what happened during that time period from the mainstream media, Steve Quayle has compiled a huge list of ‘High Jump’ stories here for those who’d like to read more about that aspect of the Antarctic cover-up.

According to a 61-page collection of memoirs of former US president John F. Kennedy, JFK believed that Nazi Germany leader Adolf Hitler escaped Germany via submarine prior to his death. JFK speculated that the Fuhrer could have remained alive after the end of the war. Conspiracy theories abound that Hitler didn’t actually die in Berlin, but that he escaped via submarine, either to Argentina or even to a secret Nazi underground base in Antarctica. (Interesting book for sale about Hitler escaping to Argentina can be found here.)

And while many historians claim evidence for those theories remain scant and most historians deny those possibilities, we know now for fact that Project Paperclip was: a secretive United States Joint Intelligence Objectives Agency (JIOA) program in which more than 1,600 German scientists, engineers, and technicians (many of whom were formerly registered members of the Nazi Party and some of whom had leadership roles in the Nazi Party) were recruited and brought to the United States for government employment from post-Nazi Germany (after World War II).

If something huge really is going on now down in Antarctica that would help explain the many recent visits there by the 1% and dignitaries from over the world, should we really expect TPTB to tell us?

In this recent story from UFO Sightings Hotspot that Steve Quayle linked to on his website on Monday they report upon another very strange anomaly coming to us from the bottom of the world as seen in the screenshot from MIMIC above. A ‘spiral anomaly’ that appears to begin from the Antarctic region, this is just the latest anomaly that we’ve seen over the past several months coming from the Antarctic as we’ve previously documented in numerous stories on ANP.

As Pam Jones for Liberty recently asked, have they activated HAARP in Antarctica? Jones makes some excellent points in this story entry: If you have been following the strange things going on in Antarctica, this is sure to peek your curiosity. Huge Wave Anomaly are coming from near the Mystery Base and Pyramids in Antarctica. Right where pyramids were found in antartica is a base called “Princess Elizabeth” that appears to be shooting massive frequencies. WHAT are the elites doing? WHY? We deserve the TRUTH! ANP agrees completely – will we ever get it?

We have seen strange wave anomalies in the past. The most recent anomaly is coming from Antarctica.

All we have to go off of is the MIMIC Maps that leave out the poles and if you make a line down into Antarctica the path crosses the mysterious Princess Elisabeth Station located on Utsteinen Nunatak in Queen Maud Land.

The station is situated at the base of pyramid-like structures while four large rectangular strange objects, partially buried under the snow, are located at about 2.5 km from the station. 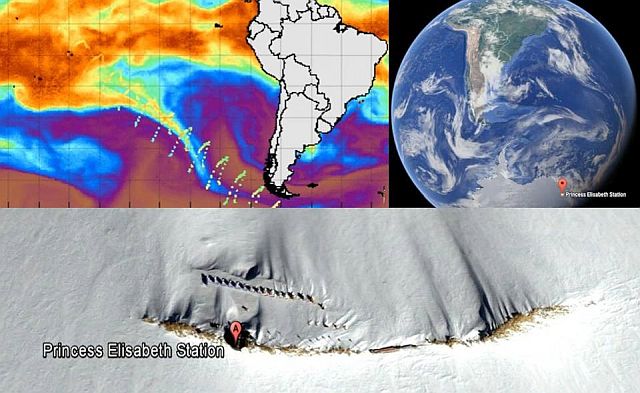 What is now happening in Antarctica and why are ‘we the people’ not getting any answers from those who are supposed to be ‘public servants’? According to this December 29th of 2016 story from the NY Post, “scientists believe a massive object that could change our understanding of history is hidden beneath the Antarctic ice.”

Reporting that this “huge and mysterious ‘anomaly’ is thought to be lurking beneath the frozen wastes of an area called Wilkes Land”, once again we got indications from a mainstream source that something is going on at the bottom of the Earth in a land covered by ice for millions of years according to scientists and mainstream science.

However, as this March 23rd story from USAToday reports, both the Arctic and Antarctic poles have just set a terrifying new record for low levels of sea ice. With ice melting down allegedly exposing long hidden secrets according to several different stories and sources, how many more secrets might soon be revealed? Will we soon find out the ‘real hidden truth’ about our planet Earth and the truths about our past that have long been hidden?

For those who may have missed it, in the first video below we hear from Steve Quayle in a recent QCast in which he talks with us about The Empire Beneath the Ice including the Nazi’s and their UFO’s while referencing the upcoming True Legends Conference in Branson, Missouri on September 15th through 17th.

In the 2nd video below we hear more about the bizarre spiral anomaly that recently originated from the Antarctic as was seen on MIMIC while in the final video below, Anonymous talks with us about Antarctica and Operation Highjump while claiming what we’re witnessing in the Antarctic right now is one of the biggest coverups in history.