The recent story over at Infowars by Michael Snyder called “Is Something Happening Inside The Earth?” within which Snyder reports upon the many long dormant volcanoes around the world now roaring back to life. Reporting upon the ‘giant fountains of lava’ suddenly pouring out of some of the most dangerous volcanoes on the planet, Volcano Discovery reports 35 major volcanoes are either erupting right now or had just recently erupted  while dozens more are stirring. As anybody who pays a great deal of attention to our planet might want to know, Snyder asks “what is causing the upsurge in volcanic activity” worldwide?

The story recently linked to on SteveQuayle.com on March 4th from Ancient Code is called “What Scientists Found In Siberia Is Truly Terrifying! And It’s Just The Beginning” within which they reported upon a huge crater that has opened up in Siberia, revealing a ‘lost world in time’ that is called ‘the doorway to the underworld’ by locals there.

Back in May of 2016, the Siberian Times reported 200,000 year old soil had recently been found at the ‘gate to the suberranean world’, a place where many of the local Yakutian people fear to approach, fully believing it to be the gateway to another dimension. Scientists say “In some sense, Batagaika does provide a view to what has happened in the past and what is likely to happen in the future.”

While the ‘door to the underworld’ continues to grow in Siberia since it was first discovered in the 1960’s, another story from Science Alert that Quayle linked to on his website back in February was called “Nearby Earthquakes Are Opening Up Africa’s ‘Gateway To Hell’ Volcano”, another story suggesting we’re living in truly Biblical Times. 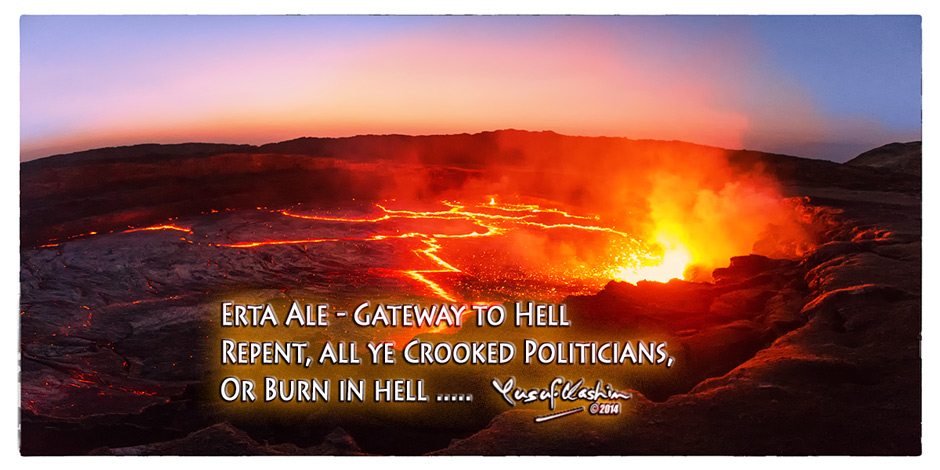 Officially known as the Erta Ale volcano in Ethiopia, scientists believe nearby tectonic activity recently opened up new cracks near the volcano, spouting new river’s of lava. As their story tells us, Erta Ale is one of the most spectacular sights in the natural world, featuring several lava lakes which have been bubbling and burning for decades….at a whopping 2,012 degrees Fahreneheit.

According to eyewitness reports, the lava lake levels have risen significantly over the past few weeks, producing “massive overflows” and “intense spattering” on top of the new fissures captured by NASA’s satellites on the southeastern flank of the volcano, 7 kilometres (4.3 miles) from the summit.

These are the first flows beyond the volcano’s crater that have been seen in a decade, according to Gezahegn Yirgu from Addis Ababa University in Ethiopia.

The ‘Gateway to Hell’ and ‘Smoking Mountain’ nicknames locals use for Erta Vale are well deserved. Set 613 metres (2,011 feet) above sea level, it’s one of just five known volcanoes with molten lava lakes, and is the only one on record with two.

The site is part of the Danakil Depression in Ethiopia, where three tectonic plates are sliding away from each other as Africa and Asia move apart. In terms of average temperatures across the year, it’s one of the hottest places on the planet. 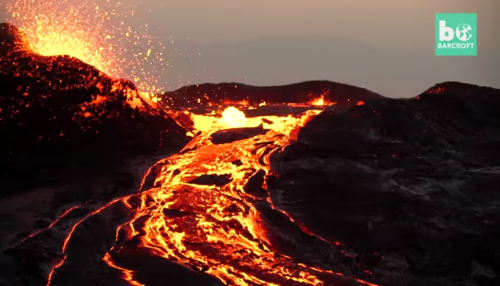 “Erta Ale is probably the most overwhelming, unreal and mesmerising sight one could see in a lifetime,” photographer Joel Santos told MailOnline in their recent story, appropriately called “The Gateway To Hell Is Cracking”.

In the first video below from Barcroft TV, they take us up close and personal to Erta Ale, their photographers putting on protective gear to venture as close to the 2,000+ degree lava flows as they can get us in a great video just recently published on YouTube. Their description of the video.:

In a scene resembling the depths of hell, a surge of magma escapes volcano Erta Ale in Ethiopia resulting in a dramatic flood of lava. Such an incredibly rare moment as this has never been witnessed before, and was a result of the tectonic plates in the area rifting apart, and great timing from the volcano tour group.

The Volcano Discovery tour group were led across the volcano by an experienced geologist in January 2017, and all wore gas masks and heat-resistant boots.

A ‘shield volcano’ like Erta Ale differs from most volcanoes in that it has much more gently sloping sides so when they erupt, they shoot their rivers of lava more outwards than upwards as seen in the images both at the top of this story and below videos.

The recent story from Collective Evolution also reports that volcanoes are erupting all across the planet with the author of the story asking if something is now happening to our Earth’s core. With massive volcanic activity also happening at a time when mega earthquake swarms are striking all across the ring of fire, our videographer in the final video below breaks down the previously mentioned Michael Snyder story and tries to come up with an answer to the question: “Is Something Happening Inside The Earth?”

And while we humans will go on our merry way, the ancient oarfish seems to know well ahead of time what we could only guess – that a terrible shaking is coming. Once again, an oarfish recently beached itself ahead of a Philippines earthquake, proving to us how little we know. According to the story by Message From Eagle that Steve Quayle recently linked to, the oarfish is called “Messenger of the Sea God’s Palace” and with good reason – according to an ancient Japanese legend the oarfish are omens of coming earthquakes.

It’s easy to see we are witnessing many ominous signs of coming change in 2017.