In this new story over at the Daily Mail that Steve Quayle linked to on his website Saturday morning titled “What Would YOU Do In A Zombie Apocalypse?”, they report that most of those living in the UK who took a recent YouGov poll are totally ill-prepared for such a situation unfolding there.

While only 10% of those surveyed claimed ‘they even had a plan’ to deal with such an apocalyptic scenario, what stood out immediately was that the most common strategy (claimed by 45% of those people surveyed) would be to FIND SOMEWHERE TO HIDE! With another 43% claiming their strategy would be to stock up on supplies while 29% would plan on ‘escaping the city’, it’s very easy to see why the UK after a zombie apocalypse could look like the small Caribbean island of Barbuda after Irma, now totally uninhabited, for the first time in 4000 years.

As preppers and those living in Irma and Harvey ravaged areas of Florida and Texas now fully know, attempting to prepare for an apocalyptic scenario AFTER the scenario has arrived is virtually impossible, hence the reason we prepare BEFOREHAND.

And while we agree that in a zombie apocalypse, having a place to ‘hide’ and food and supplies and making sure we’re out of the city are great strategies, they’re also strategies that need to be implemented well ahead of time – not after zombies start munching upon human flesh. As the iconic photograph from the fictional zombie TV show the Walking Dead below shows, those who waited until the last minute to ‘prepare’ by ‘getting out of the city’ quickly turned into ‘zombie food’.

It’s very easy to see why ‘life’ will imitate ‘art’ under many different, very real catastrophic scenarios and why getting out of the cities before everybody else is trying to do so is the best way to ensure our loved ones survival. 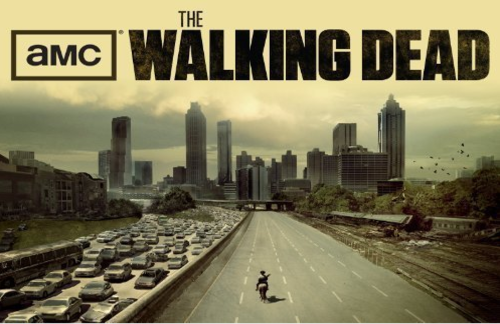 It’s long been warned within prepping circles that population density is an absolute key factor to consider in preparing for future survival situations, especially considering how quickly society could break down should our completely electricity dependent society be suddenly cast into a situation where we no longer have electricity.

While the average population density of the US from coast to coast is 80.5 people per square mile, the population density of the Northeast Megalopolis (which encompasses the District of Columbia and part or all of 11 states: from south to north, Virginia, Maryland, Delaware, Pennsylvania, New Jersey, New York, Connecticut, Rhode Island, Massachusetts, New Hampshire, and Maine) is 931.3 people per square mile!

Thrown into a situation where food and resources are suddenly in very low supply, would you want to be in a location where there are another 930.3 people living in the square mile surrounding you? Fights and chaos breaking out in stores ahead of Harvey and Irma give us a small taste of what could be coming should a worst-case scenario strike America. 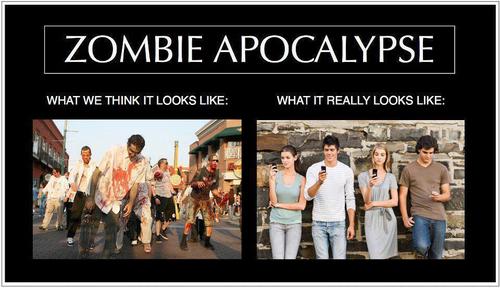 And while the DM story discussed a hypothetical zombie apocalypse that will likely never come, as we read in this new story from the Daily Mail and see in the 1st video below, a ‘zombie apocalypse’ is already happening here in America. Proving to us just how important ‘situational awareness’ is as an absolute key to surviving just about anything, we see a man so busy on his cell phone that he neglects to pay attention to the situation surrounding him. As he’s paying attention to texts or whatever is on his phone, he’s attacked by two thugs he very well should have seen coming way before 4 UPS workers arrive to bravely shoo-away the trash who were attempting to rob him.

As the Gardena, California police department wisely posted on their Facebook page, what we see in this video is an important reminder to always pay attention to your surroundings.

On September 7th 2017 at about 2pm, our victim left a bank in Gardena and went to a nearby UPS store located in the 17100 blk of Western. As he walked through the parking lot, two male suspects attacked him from behind. One suspect was armed with a yellow crowbar. The suspects knocked him to the ground, struck him with the crowbar and tried to take his property from him.

Thankfully due to the heroic intervention of UPS employees and customers this caused the suspects to flee. They then fled in a white sedan south on Western Ave. Thankfully, the victim was not seriously injured. Shout out to UPS for hiring heroes!

If anyone recognizes these suspects or have any information regarding this violent crime, please notify the Gardena Police Department at 310-217-9625 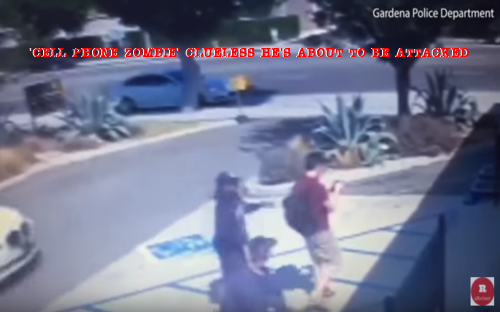 With the UK having recently been hit by another terrorist attack that possibly could have been prevented according to a tweet from President Trump, their 5th major terror attack in 2017 already leaving the threat level in the UK at critical following an explosion on the underground train, it’s clear why situational awareness should be an ‘absolute’ for preppers everywhere. For those who don’t feel they are up to par on ‘situational awareness’, the 2nd video below from videographer ‘City Prepping’ gives us a great breakdown on how we can better prepare ourselves to be in the right position to protect ourselves, our loved ones and/or strangers should disaster, terrorists or criminal thugs strike.

As unrest and chaos continuing to heat up in several different locations across America, such as St. Louis recently after the acquital of a former police officer in the shooting death of a black man led to rioting, 10 police officers injured and the mayor’s home damaged, we see more reasons why we need to keep our eyes and ears open and be on guard at all times.

With Antifa terrorists actually claiming that using violence upon law enforcement officers and every-day Americans who think differently than they do is justified proving just ‘how far off the deep end‘ some Americans have fallen, it’s baffling that some in the mainstream media continue to justify that violence. Yet as we hear in the final video below, all of this shows us why we always need to stay ‘situationally aware’ for to fail to do so in 2017 could be tragic.