In the new story over at the Guardian that Steve Quayle linked to on his website Friday morning they report that fearful Californians are very concerned about how to survive what may be coming with many experts warning that Long Beach, CA, is likely a prime target of a North Korean nuclear attack. With experts in a meeting there urging first responders to ‘think about the unthinkable’, a nuclear bomb exploding at the Port of Long Beach, the Guardian story neglects to report upon one reason why a Kim Jong Un attack upon the port city could create a catastrophe beyond what anybody is now reporting.

As Steve Quayle tells us, with the state of California now leading the nation in the use of hydrogen powered vehicles, hydrogen stations and hydrogen production plants are popping up all over area as seen in the map screenshot below from the California Fuel Cell Partnership. With the state of California also joining the states of Texas and Louisiana as the 3 largest producers of hydrogen in the nation, a North Korean hydrogen bomb attack upon Long Beach, combined with all of the hydrogen facilities in the region, could create an unimaginable firestorm with the possibility of millions dead as we see in the nuclear blast radius maps featured further below.

While experts claim that the North Korean hydrogen bomb test on September 3rd had a yield of between 50 and 250 KT, if such a blast were to create a massive firestorm in a region already full of hydrogen production plants and hydrogen fuel stations, the overall yield of the explosion would increase exponentially as we examine in more detail below. 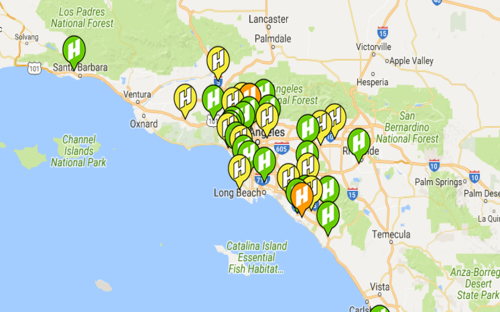 While we hear in the first video below that the globalists who’ve long been working to ‘take down America’ could USE North Korea and Kim Jong Un as the perfect patsy for a false flag attack upon our nation, an attack that would be part of the ‘end game’ to fully bring into America a globalist, totalitarian dictatorship, this new story from the NEO Journal fully details the role that Kim and North Korea are playing in the race towards Armageddon.

With reports that Iran and North Korea are now collaborating in an exchange of materials and technicians to mutually develop nuclear weapons capabilities at a time when many experts are warning the US military doesn’t even have the capability to shoot down North Korean missiles, we see why we should be concerned about Iran’s threats to drop the ‘father of all bombs’ while claiming to have already infiltrated the US military, obviously during the Obama ‘open doors to terrorists’ years.

In the next graphic below from the Nuclear Secrecy website map we see the damage radius that would be created around the Long Beach area should it be hit with a North Korean nuclear bomb with a yield of 250 KT, the highest estimated yield of their September 3 test. While such a blast would be catastrophic with over 140,000 deaths and nearly 280,000 injured, this map doesn’t take into account all of the hydrogen stations in the region which would add to the catastrophe as seen in the 2nd graphic below. 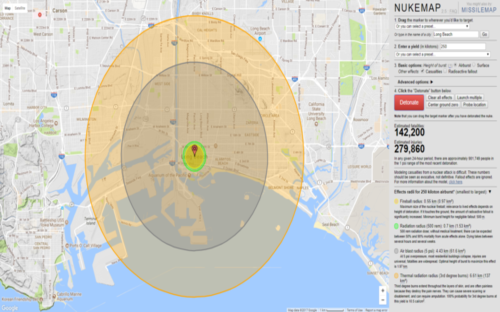 As we see in the next map below which simulates a 25 megaton yield that could be created by all of the hydrogen plants and stations in the region being consumed in a massive thermobaric fuel-air explosion, the blast radius no longer encompasses just the Long Beach area but theoretically spreads out to even beyond Los Angeles.

The incredibly destructive shockwaves that could be caused by such an ‘overdriven explosion’ have been called a humanitarian workers worst nightmares as hydrogen fuel already spread throughout the region (though now properly contained at numerous stations and plants) also explodes in the gigantic fireball that has already consumed the region.

These paragraphs below properly detail how a standard hydrogen bomb or nuclear explosion could combine with hydrogen fuel plants/stations in the area that has been hit to create an ‘enhanced blast fuel-air explosion’.

Volumetric weapons are a family of munitions that includes such better-known subtypes as thermobaric and fuel-air explosive (FAE) weapons, and are variously referred to as vacuum bombs or enhanced blast weapons. The differences between thermobaric weapons and fuel-air explosives are fairly arcane, but the fundamental effects on the people injured and killed by these weapons are pretty much the same.

“If you’re a civilian on the ground in a marketplace and the bomb goes off, the effects are going to be very similar,” Robert Perkins, a weapons researcher at Action on Armed Violence, told VICE News. “It’s going to achieve an incredibly destructive shockwave, which is the thing that unites these weapons.”

With the LA region also home to many Hydrogen fuel stations, such a 25 megaton blast could result in over 1.5 million dead with more than 4 million suffering from catastrophic radiation-related illnesses and injuries. 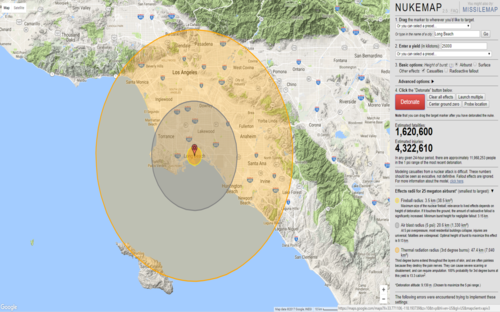 And while such a blast would be far beyond catastrophic, should an attack upon the same region be caused by one of the biggest nuclear weapons in the world, Russia’s ‘Tsar Bomb’ with a 100 megaton yield, more than 3.5 million would perish with nearly 6 million more suffering horrible injuries that could also lead to death.

As a NATO military leader recently stated, “Russian military exercises appear to be preparation for big war” and while we’ve been told time and again by ‘Russian insiders’ living here in the US that the very last thing that Russia wants is a war with the US as they know what such a war would bring to the world, such a war is always only ‘one accident away’. 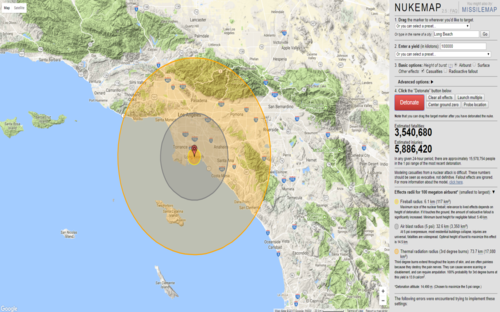 With North Korea once again rocked by a 3.4 magnitude earthquake that was detected near one of their nuclear test sites indicating Kim Jong Un has likely conducted another nuclear test, the state of Hawaii is once again urging their own residents to prepare for the unthinkable as Kim continues to taunt President Trump and threaten America.

Since Iran is also now defying President Trump by testing a new medium-range ballistic missile that could hit Israel while the North Korean war drums continue to beat, we see in an excellent compilation of recent news reports in the 2nd video below why outlets like the NY Times are now putting out stories titled “How To Survive The Apocalypse”.

With Hollywood stars backing the ‘mad rocket man’ Kim Jong Un and North Korea, joining the mainstream media in their support for Kim as detailed in this new story and the 3rd video below, proving the depths of insanity many have fallen to, we pray God grants President Trump the strength and wisdom to navigate America through this period of history and the dangerous times ahead.