ANP was going to wait until tomorrow to follow up on Sunday’s explosive news about the DNC staffer that was murdered last July amidst the Wikileaks revelations about the DNC and the Clinton campaign rigging the primaries, but the amount of breaking news since yesterday, has pushed this to the forefront.

For those that did not read yesterday’s piece titled “MSM Attempts To Kill ‘Murdered DNC Staffer Story,’ And Instead Blows Up The Internet,”  a very brief summary because quite a of new information has become available since then.

Washington Post attempted to label the recent revelations by a former DC homicide detective investigating Rich’s murder, saying he discovered Seth Rich was communicating with Wikileaks, as a “conspiracy theory,” when Internet entrepreneur KIMDOTCOM revealed that Rich was the source of the leaks to Wikileaks, Kim himself was involved and offered congressional testimony, with Sean Hannity then publicly inviting him to his show to discuss it.

There is much more showing Kim had prior knowledge going back to 2014, but since then, a number of revelations have come out, so… moving along.

On May 15, 2017, Sean Hannity shared a Fox 2 news report titled “Family’s private investigator: There is evidence Seth Rich had contact with WikiLeaks prior to death,” asking “Thoughts twitter??”

Seth Rich’s cousin, Jonathan Rich, less than an hour later, responded to Hannity stating “First thing I said when my Dad told me was he knew something and he was murdered. The rest of the family thought I was nuts. See last name.” The next day user Andy Rich reprimanded Jonathan, saying “This is not the place & not a topic for you to comment on. I love you but filter bro. #family”

Jonathan’s tweet was deleted shortly after, but the internet is forever, and it was archived, screen shot below, and link to archive here. 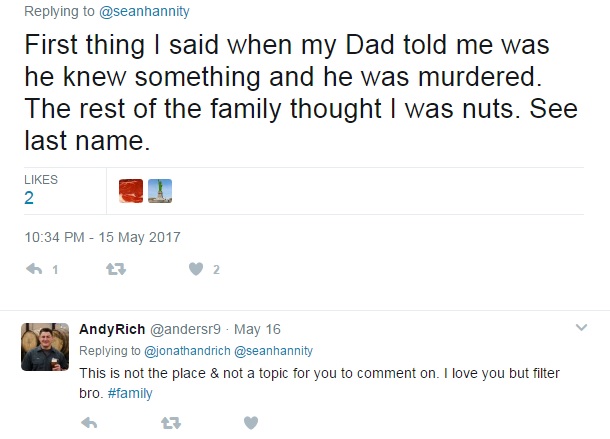 Following Jonathan’s initial response to Hannity and before he was reprimanded by Andy Rich, he also responded to actor James Woods, who asked “When will the #Russia gag start to wear thin? We are so over this baseless whining. Aren’t the #ToddlerTantrums wearing the #lefties out?,” by answer with “Maybe tomorrow when the #SethRich story hits Fox News.” 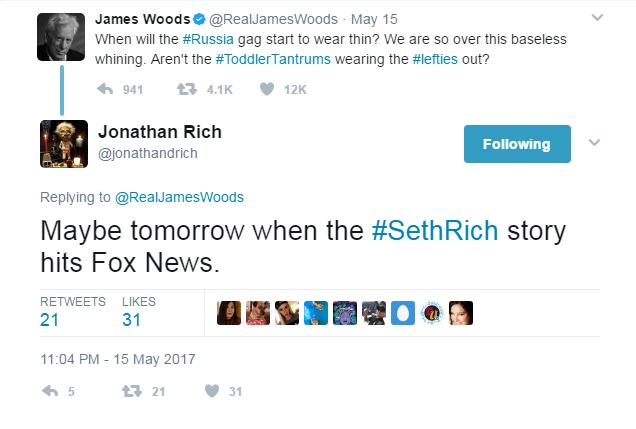 Despite deleting his initial tweet, on May 21, 2017, after the Internet blew up with the Seth Rich story again, and Wapo tried to kill it, Jonathan then retweeted another Hannity message that said “@KimDotcom ANNOUNCEMENT COMING. All please follow @KimDotcom for further details.”

Jonathan’s interest nor his opinion is new, as back in November 2016, he responded to a tweet linking to a podcast that asked, “Why do people close to Hillary & Bill Clinton tend to end up dead in weird ways?,” with three words “like my cousin.” (H/T Big League Politics) 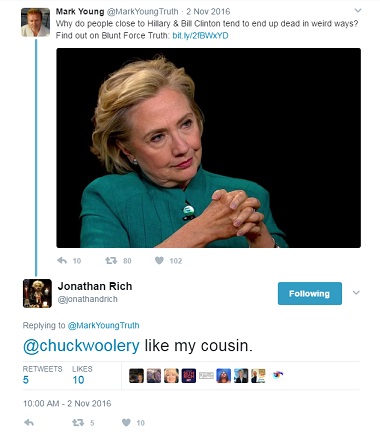 In August 2016, Wikileaks highlighted the fact that a man named Brad Bauman was the Rich family’s new “spokesman,” and described him as “a professional  Democrat crisis PR consultant.” According to his LinkedIn page, Bauman’s experience is listed a a partner for The Pastorum Group and “Managing a crisis communications and full service public relations firm,” as well as being a communications consultant “Providing strategic communications advice to Democratic candidates and labor unions.” Both those positions are listed as current.

Evidently his services include going after any high profile personalities that are discussing the Seth Rich murder on Twitter, which includes Former House speaker and presidential candidate, Newt Gingrich, Fox News host Sean Hannity, the original Fox 5 writer that reported on the connection between Seth Rich and Wikileaks, Malia Zimmerman, and KimDotCom, who claims he knew Rich, was involved, and offered to provide testimony to Congress. 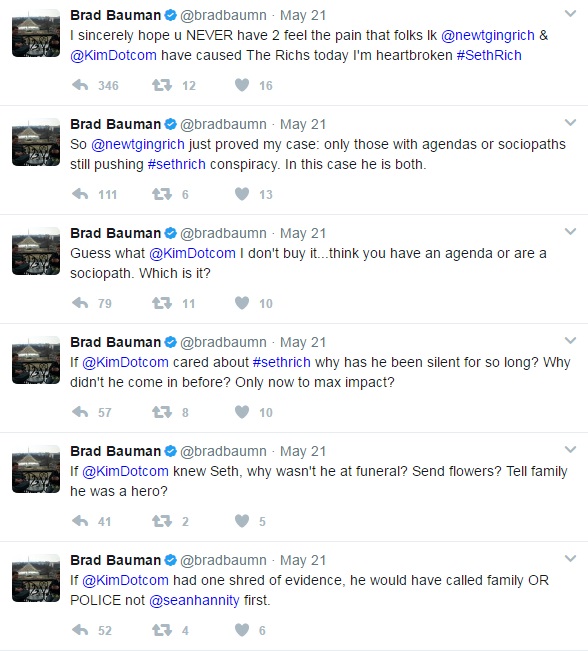 The reason Bauman went after Newt Gingrich is because Gingrich expressed his hope, on national television, that the Special Counsel tapped to look into Russia influence, would also look into the Clinton connections with Russia and then Gingrich brought up Seth Rich, calling it a “very strange story,”  that he was “assassinated” after giving Wikileaks tens of thousands of emails and attachments.

Bauman’s attacks against Hannity is because he invited KimDotCom onto his radio and television show to discuss what he knows, then told his readers there was an announcement coming and to follow KimDotCom for further details.

As to Bauman’s question of why KimDotCom didn’t attend Seth Rich’s funeral…. maybe Bauman should know that the man resides in New Zealand, and perhaps, just maybe, he wasn’t willing to risk being beaten and shot in the back twice in an “attempted robbery” by making the trip?

Bauman’s also sent out a tweet  on May 16, 2017, to Malia Zimmerman, saying “Hey @MaliaMZimmerman WHEN R U UPDATING #sethrich story with family statement? Sent it an hour ago…hiding something????”

The statement that Bauman sent into Fox 5, reported on by the same reporter he accused of hiding something:

“Even if tomorrow, an email was found, it is not a high enough bar of evidence to prove any interactions as emails can be altered and we’ve seen that those interested in pushing conspiracies will stop at nothing to do so,” Bauman said. “We are a family who is committed to facts, not fake evidence that surfaces every few months to fill the void and distract law enforcement and the general public from finding Seth’s murderers.”

Sounds like Bauman is already setting an argument against any “proof” that may come out by way of actual emails, showing that Rich was indeed communicating with Wikileaks, as has been “implied” by Julian Assange himself when he spoke of how many “risks” leakers take, then immediately using Seth Rich as an example, while saying they never reveal their sources.

For those that missed that interview, a quick reminder below:

Interesting, that in the midst of KimDotCom’s comments and Sean Hannity’s attention and Bauman’s Twitter meltdown, that Wikileaks founder, Assange, also sent out another tweet, saying “WikiLeaks has never disclosed a source. Sources sometimes talk to other parties but identities never emerge from WikiLeaks. #SethRich” 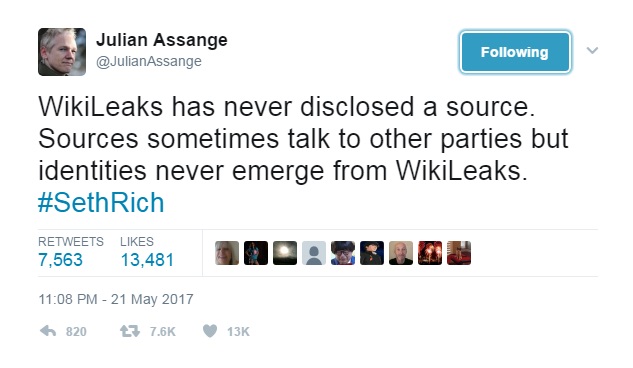 Between Assange’s previous interview, Wikileaks offering a 20K reward for information leading to the arrest of Rich’s murderer, and this latest tweet, he is practically drawing a map to lead people to his source while “technically” not naming him.

Last but not least, Sean Hannity has just informed the public that “Complete panic has set in at the highest levels of the Democratic Party. Any bets when the kitchen sink is dumped on my head??.” 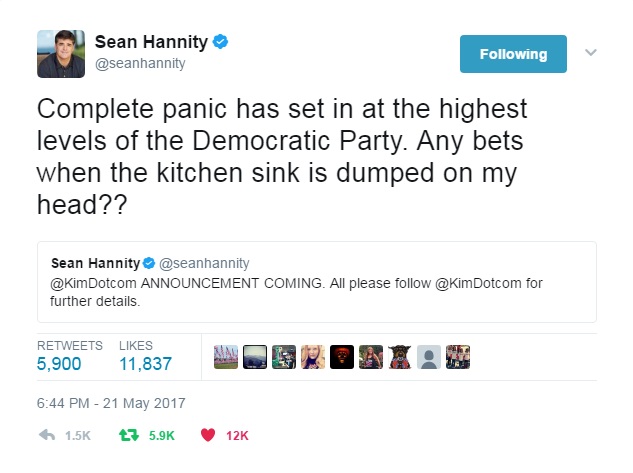 Hannity appears to be right. There is a coordinated campaign against anyone that dares question the “official” narrative that Rich’s murder was a robbery, despite nothing being taken from him, as well as the meltdown on Twitter by a “democratic crisis consultant,” which in and of itself is odd that someone like that would be speaking for the family. It seems that it isn’t just Independent Media asking questions, but as shown above, Seth Rich’s own cousin seems to think “he knew something” that got him killed.

One would think that the murder of a young man, who just happened to work for the DNC, had access to the very data that Wikileaks was publishing, and was murdered as Wikileaks was releasing those emails, would have the media all over it, rather than attacking anyone that dares question the official narrative.

KimDotCom is expected to offer some type of information on Tuesday and we will be sure to bring it to readers if it is as explosive as many seem to think it will be.