Is The ‘Bombshell Of All Bombshells’ Coming? Wikileaks Julian Assange To US State Department: ‘I’ll Try To Make This Clear, We Don’t Have A Problem, You Have A Problem’ 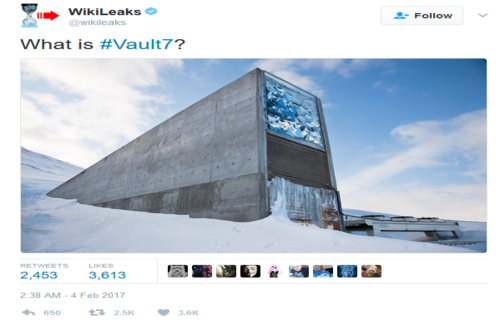 Over the past several days, the whistleblowing website Wikileaks has released a series of mysterious tweets on Twitter that are in the process of ‘melting down’ the internet as ‘web sleuths’ across the ‘world wide web’ attempt to figure out what the tweets are referring to with many people asking: “what does Wikileaks know that we don’t know?”

Beginning on February 4th at 5:38 a.m., Wikileaks put out a tweet that simply asked “What Is #Vault7” within which they featured a photograph of the Svalbard Seed Vault lying in the snow on the Norwegian island of Spitsbergen as seen at the top of this story. Each day since then, Wikileaks has released another mysterious and cryptic tweet.

The Svalbard Seed Vault by the way is the biggest ‘doomsday seed vault’ in the world, holding more than 500,000 different samples in what is also considered the most diverse seed vault in the world.

Interestingly, the tweets released by Wikileaks also followed the “Five W’s” often used in investigative journalism and police investigations. According to the principle of the Five Ws, a report can only be considered complete if it answers these questions starting with an interrogative word. What? Who? Where? When? And Why? 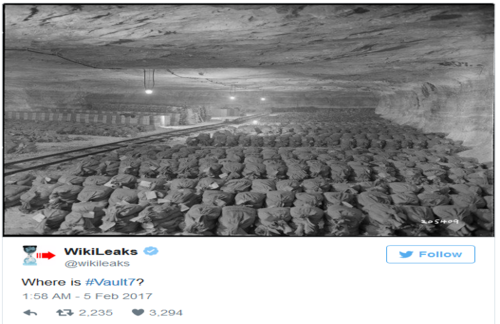 On February 5th at 1:58 a.m. Wikileaks put out another tweet which simply asked “Where Is #Vault7” which contained the photograph seen above of a Nazi gold stored in the Merkers Salt Mine, discovered by the US Army in 1945. According to the National Archives, the mine contained gold bullion, gold Reichsmarks, British gold pounds, French gold francs, American gold pieces, gold and silver coins, additional foreign currency, silver bars, platinum bars, artwork, and more.

Interestingly, sandwiched in between the first two cryptic Wikileaks tweets seen above, they put out this tweet which ANP had previously reported on in this story: “Trump on US government last night: O’Reilly: “Putin’s a killer” Trump: “There are a lot of killers. You think our country is so innocent?”

On February 6th at 4:33 a.m., Wikileaks put out another tweet asking “When Is #Vault7?” which showed the photograph seen below of a jet engine test taking place at Langley Air Force Base in Virginia which shows a test being run upon a Pratt and Whitney F119-PW-100 jet engine. These ‘soundproof hush houses’ are sometimes called “vaults.” 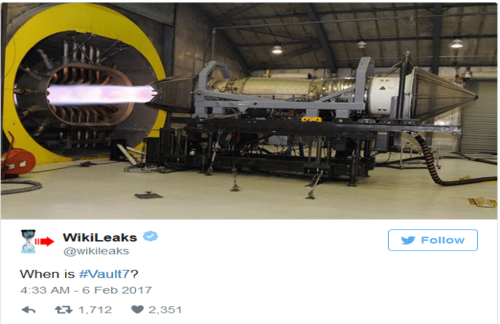 On February 7th at 3:52 a.m. Wikileaks put out a tweet asking “Who Is #Vault7” showing photographs of ‘3 infamous spies’, Bradley Manning, Julian Assange and Edward Snowden, within posters made up of them by the US government.

With the ‘Infamous Spies’ headlines looking almost like the headlines of some ridiculous tabloid newspapers, might ‘Vault 7’ refer to upcoming bombshell Wikileaks revelations which they’ve promised to bring us in 2017? 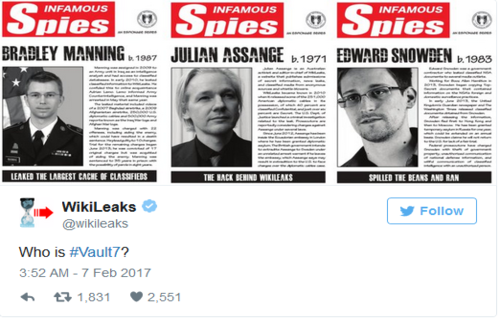 Finally just a short time ago on February 8th, Wikileaks has just put out another tweet which asks “Why Is #Vault7?” which shows the photograph seen below taken back in February of 2013 taken at the Whiteman Air Force Base In Missouri that was seen in an article called “Keeping Structures Strong” and shows Staff Sgt. Adam Boyd, a 509th Civil Engineer Squadron structural supervisor, welding a box blade for a snow plow. That story begins as such:

As Mother Nature’s resources naturally break down with time, so does the infrastructure on base. Buildings age, pipes wear down and other vital assets require replacement.

This creates a balancing act for unit facility managers as they try to perform their primary duties and juggle the multiple issues that make buildings seem as if they are constantly falling apart, said Staff Sgt. Adam Boyd, 509th CES structural supervisor.

“Everything you see on base is constantly aging,” Boyd said. “Part of our job is to fight the aging process, to keep the buildings looking as new as possible.”

Without the structures shop, the entire base would decay, said Boyd.

It was not lost on some that the photograph appears to show steel being melted, what some other Twitter commenters believed may allude to the melting of steel on 9/11 in New York city. 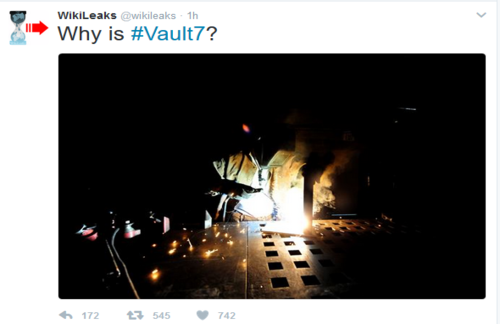 What are all of these cryptic and mysterious Wikileaks tweets about? Back on February 1st, only days prior to the beginning of the cryptic tweets, Wikileaks released the tweet seen below teasing a pending publication and an ‘insurance file‘. So, what does Wikileaks know that we don’t know? Several new videos below take a look at ‘Vault 7’ and what these mysterious tweets put out by Wikileaks this week might mean.

We also should remember that back on December 31st of 2016, Wikileaks put out a tweet which stated: “If you thought 2016 was a big WikiLeaks year 2017 will blow you away. Help us prepare for the showdown.” What ‘showdown’ was Wikileaks referring to? And, is America about to get another massive dose of truth? 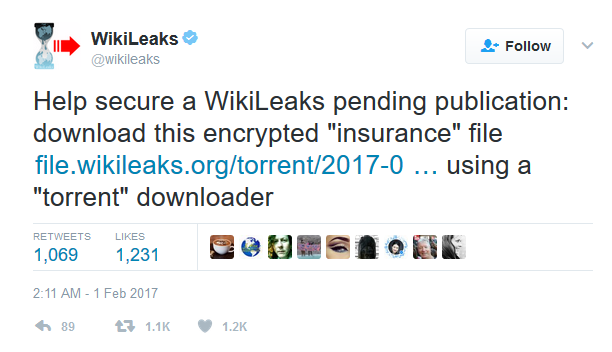 What do you think ‘Vault 7’ is all about? The theories explored within these videos include ‘Vault 7’ might have something to do with the FBI’s ‘Hillary Clinton emails’ as on February 4th, soon before Wikileaks first cryptic tweet came out, they also tweeted “Full Text: FBI Quietly Releases Part 6 Of Its Hillary Clinton Investigation” while linking to a PDF ‘coincidentally’ being held at this website address: https://vault.fbi.gov/hillary-r.-clinton/hillary-r.-clinton-part-06-of-06/at_download/file.

Is ‘Vault 7’ the next part of the Hillary Clinton emails, ‘Vault 6’ having already been released?

Others believe that Vault 7 might have something to do with what happened on 9/11 and the mysterious ‘building #7’ that collapsed to the ground that day without being hit by a plane like the other two WTC buildings. 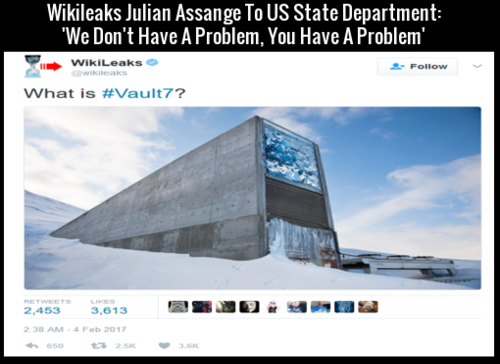 We Are Change reports: An anonymous account named “AnonScan” gave their input, tweeting out even more cryptic material and a riddle with several videos, including a video that shows Julian Assange calling the U.S. government, and warning the U.S. State Dept. of a massive un-redacted cable leak that isn’t from them.

The video ends with “it’s time,” an echoed term that has previously been tweeted by Snowden as well. The group’s riddle, “the answer is there right in front of you, if you know the alphabet Google is your friend.. or maybe not.” You can see that video of the phone call made to the US State Dept as the final video below, a video within which AnonScan make a mysterious reference to February 19th. What’s supposed to happen on February 19th?

Interestingly, in the phone call that Assange made to the US State Department in 2011 he stated “I’ll try to make this clear….we don’t have a problem…you have a problem.” So what does Wikileaks know that the American people don’t know and why is February 19th of ‘great importance’ to AnonScan, who made the video seen within it?

According to another theory floating around on Reddit as seen in the screenshot above, these tweets represent an ‘insurance policy’ and an attempt to let somebody know that ‘they have the goods’ about something, possibly having to do with the events of 9/11 or the still-missing Hillary Clinton emails.

Interestingly enough, the previously mentioned AnonScan video also brings up Google and their ties to Hillary Clinton and the US State Department and as Assange himself reports in this Wikileaks story, Google is not what it seems. Might Google be even more sinister than what we already know about it?

Each of the videos below take a look at what ‘Vault 7’ might be and in closing, we find it quite interesting though not surprising that in doing a search for ‘Vault 7’, not even one mainstream news media source showed up as covering it. Is the MSM ‘blacking out’ Vault 7 for one reason or another? This story will certainly be continued as more info is released in the days and weeks ahead.