“Anti-American subversives involved in ANY WAY in an unconstitutional coup against our President will be run down and executed immediately by the world’s most supreme warriors. There will be nowhere to run to, nowhere to hide, no mercy, no sense of humor. Harsh examples will be made. My prediction is it will be a gruesome massacre.” Craig ‘Sawman’ Sawyer on Facebook

(ANP note: We absolutely do not condone nor do we encourage any unlawful violence. We do not ‘endorse’ the Facebook post seen in this story nor are we ‘issuing a call to action’. In publishing this news story, we hope to help educate people to understand the dire point in American history we have arrived at. As Charles Krauthammer recently stated on Fox News, never before in history have we been at the point where a legally elected president’s power is still being challenged 6+ months into his term: “That’s why I hope people would tread carefully”. We have arrived at a national emergency.)

While many Americans may have never heard of Craig ‘Sawman’ Sawyer, Wikipedia has an entry for the US Marine Veteran and former Navy SEAL sniper and combat instructor that cannot be overlooked, especially considering his recent Facebook post that’s now going viral. Also the founder of the website Tactical Insider, a man who has a resume that would trigger the average American snowflake in a second flat, Wikipedia goes on to share this telling sentence about him.:

After his military career, Sawyer has run specialized teams to provide security to politicians and dignitaries including Hillary Clinton, John McCain, Donald Rumsfeld, and John Negroponte.

While that sentence alone might sound like ‘Sawman’ was catering to corrupt politicians who have long been working to take down America to bring in their satanic and dictatorial ‘new world order’, we take a look within this story at the recent posting made by Sawyer to Facebook within which he sounds out a very loud and clear warning to anyone thinking about carrying out an illegal coup to take down America-1st President Donald Trump.

We have republished Sawyers full statement below and in reading this, please keep in mind that Sawyer clearly has ‘insider knowledge’ having run ‘specialized teams’ to protect those who he now appears to be sending his very loud and very clear message to. Sawyer’s Facebook post is seen below in red and italics with much more below it including several new signs that the globalists will now stop at nothing to complete their destruction of America.

Sawyer joins John B Wells in the 1st video below. You can see a screenshot of Sawyer’s post at the bottom of this story.

Patriots, this would be nothing less than an act of war against the American people. It would be the removal of our boldest defender & last possibility of maintaining our protective Constitution. Under the boot of globalists, life as we know it, would immediately decline to the model that suits the globalist interest – Marxist/Socialist/Communist. They get complete control, you get zero. Freedom, Gone! Liberty, Gone! This agenda is evil and simply cannot be allowed, at ANY cost.

Like ALL military, law enforcement and government officials, I took an oath to defend our Constitution against ALL enemies, foreign and domestic. By abandoning the rule of law and conducting a coup against the President & policies WE THE PEOPLE elected, they have made themselves enemies of the United States.

Under threat, ALL patriots, whether civilian, law enforcement, government, or military, have the duty to defend our Constitution against such enemies. Some speculate on “civil war”. I readily recognize a much more sobering reality: Anti-American subversives involved in ANY WAY in an unconstitutional coup against our President will be run down and executed immediately by the world’s most supreme warriors. There will be nowhere to run to, nowhere to hide, no mercy, no sense of humor. Harsh examples will be made. My prediction is it will be a gruesome massacre. Why? Because one side in this conflict has 8 Trillion bullets & the other side doesn’t know which bathroom to use.

It will likely only take a few hours. Lessons will be learned. History will take note. Order restored. Patriots, We The American People stand united as one, against ALL enemies. We are peace-loving people who abide by the rule of law. Prepare yourselves in case this ridiculous insanity actually gets played out and the rule of law goes out the window under their gross miscarriage of our legal process. Shaking my head…

United We Stand! At the ready. USA! 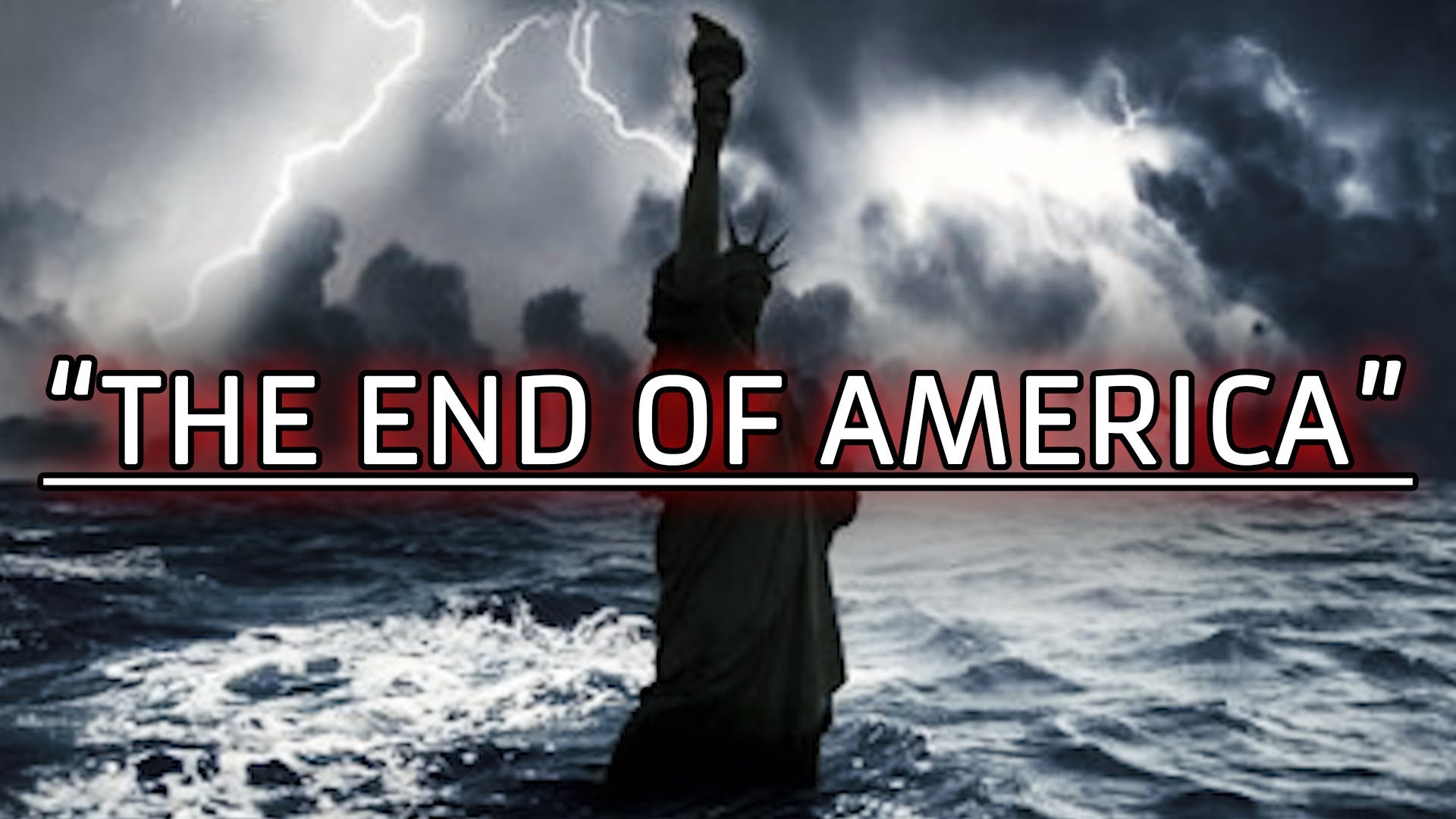 Will we soon witness ‘globalist enemies of America within’ being ‘taken out’ in the streets? Of course, we stand fully against unlawful violence here at ANP and we pray for peace yet as we reported on ANP back on August 4th, more and more people are warning of a very real potential of civil war suddenly breaking out in America should globalist members of the ‘deep state’ succeed at taking down President Trump.

Joining actor James Woods in issuing warnings we hear from Michael Savage the very same warning as shared in this story from Infowars that the Drudge Report linked to on Sunday morning. Savage warns that the ‘day of the locusts’ is coming if the American people find out officially by ‘Trump’s take down’ that their votes don’t matter. And with the America-hating deep state simply doing what they want, we’d have absolute PROVE that America is no longer a Republic but a dictatorship.

With Sawyer’s warning that we could soon see blood running in the streets of America showing us how close our country is now to what we’re now witnessing in Venezuela, where they recently crushed an ‘anti-government coup’ at a military base, we get more and more proof that the globalists who’ve long been working to ‘take down America’ will do it through any means necessary, including completely illegal ways as the ‘criminal left’ has long shown us laws matter nothing to them.

We also don’t find it the least bit surprising that the ‘deep state’ has picked up their attacks upon President Trump soon after he put an end to their horrific program of arming the same terrorists who want to kill Americans after President Trump saw a horrific beheading video of a young child carried out by Barack Obama and Hillary Clinton supported terrorists. It’s clear that Obama and Clinton have the blood of many, including innocent children and Americans, dripping down their God-forsaken hands

Should Barack Obama and Hillary Clinton be tried for treason against America?

With everything now happening possibly serving as an absolute confirmation of some of Americans worst fears, that our votes mean absolutely nothing and our ‘deep state government’ is nothing but totalitarian tyrants who quite literally think that they can get away with whatever they want and “damn the rest of us”, we understand why Sawyers statement is being made. For if America is truly a ‘dictatorship’ and those in power can quite literally get away with murder, there is no fair and just law in this land and as Sawyer makes clear, nor would there be any ‘safety’ for those who think themselves to be above it.

As Sawyer clearly points out, should globalism arrive here fully, forcing Americans to be unwillingly living under the ‘satanic’ rules of globalism that abide NOT by the US Constitution nor does it care for the rights of the citizens living here, we’ll no longer be ‘free’. And as the original Declaration of Independence fully and forcefully declares, our Founding Fathers clearly understood that ALL ‘dictators’ must fall for ‘mankind’ to be free.:

When in the Course of human events it becomes necessary for one people to dissolve the political bands which have connected them with another and to assume among the powers of the earth, the separate and equal station to which the Laws of Nature and of Nature’s God entitle them, a decent respect to the opinions of mankind requires that they should declare the causes which impel them to the separation.

We hold these truths to be self-evident, that all men are created equal, that they are endowed by their Creator with certain unalienable Rights, that among these are Life, Liberty and the pursuit of Happiness.

— That to secure these rights, Governments are instituted among Men, deriving their just powers from the consent of the governed,

— That whenever any Form of Government becomes destructive of these ends, it is the Right of the People to alter or to abolish it, and to institute new Government, laying its foundation on such principles and organizing its powers in such form, as to them shall seem most likely to effect their Safety and Happiness. Prudence, indeed, will dictate that Governments long established should not be changed for light and transient causes; and accordingly all experience hath shewn that mankind are more disposed to suffer, while evils are sufferable than to right themselves by abolishing the forms to which they are accustomed. But when a long train of abuses and usurpations, pursuing invariably the same Object evinces a design to reduce them under absolute Despotism, it is their right, it is their duty, to throw off such Government, and to provide new Guards for their future security. 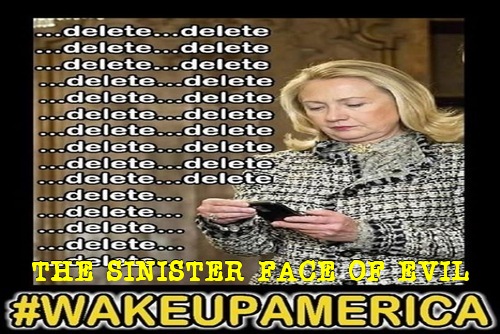 However, once a ‘government’ becomes ‘totalitarian’ and ‘dictatorial’, it is no longer a ‘just government’ and with God’s amazing grace, all such government’s will fall. Knowing that America was ONLY a ‘President Trump’ away from having someone who has been perfectly described as one of the most corrupt and evil politicians of all time in the White House shows us just how close America came to absolute disaster.

And seeing the absolute ‘hissy fit’ being thrown by those who supported the loser, those who continually cry “Russia”, proves to us that this isn’t over by a long shot. Listen to those warning of disaster ahead. The cry is becoming deafening.

In closing, it’s really very simple. Americans elected a pro-America president in President Trump to help restore sovereignty to America. Should ‘enemies of America within’ continue to follow the path that they are now on and attempt to illegally ‘take down’ President Trump and his ‘America-first’ policies to institute their satanical and tyrannical globalism, more and more evidence shows that they will have both the wrath of God and that of millions of law-abiding American people to contend with.

We pray that will be both legally and peacefully.

Again, the Facebook post we see below from Craig ‘Sawman’ Sawyer might trigger those who don’t understand that corrupt government could have possibly existed here in America for many, many years before Trump got into office and who don’t understand that a ‘global dictatorship’ will NEVER be allowed here in America by the very-well armed American people. 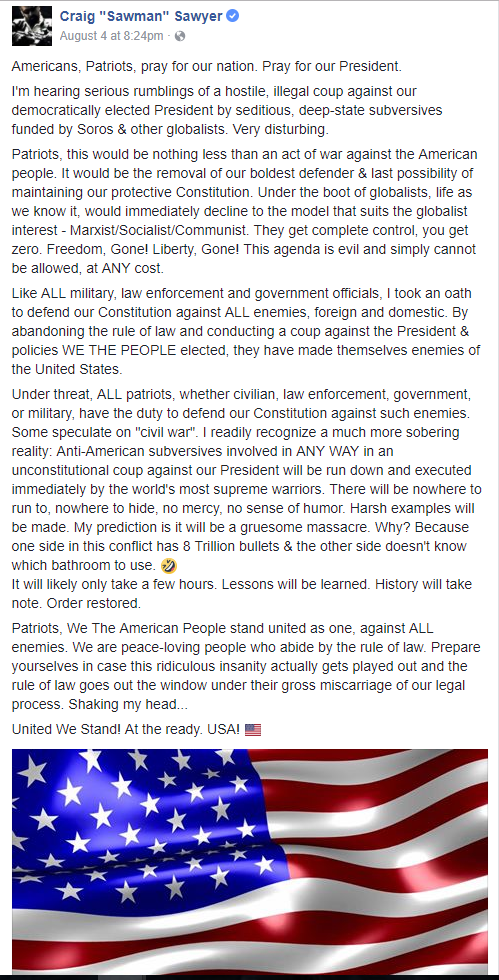