One of the most definitive Annotated timelines, of “Biased FBI and DOJ Officials Broke The Law And Tried To Decide The Election,” published at Forbes on February 5, 2018, by Thomas Del Beccaro, who is an op-ed contributor at Forbes, has mysteriously disappeared off of Forbes website two days after it was published. No editors note has been offered explaining why the article vanished off the website, the URL simply brings up a 404 error.

Previously deleted articles from Forbes have offered notification at the URL as to why an article was removed, as shown by a note from a piece deleted back in 2015:

The original article still shows up in Google search results, at least for the time being, as shown in the screen shot below, but clicking those Forbes’ links brings us to the same 404 error page: 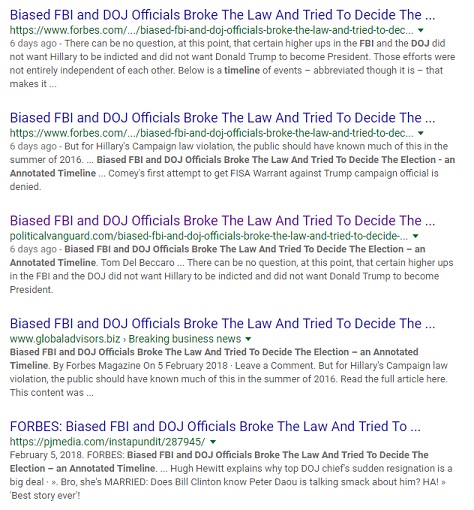 Cached and archived version are available, because the nothing can truly be disappeared off the internet once it goes viral, and this story did, with over 150,000 views on Forbes before they mysteriously deleted it, and more on Mr. Del Beccaro’s own website, Political Vanguard, where the article continues to be updated as new relevant information becomes public.

Mr. Del Beccaro shared his Forbes link via Twitter on February 5, 2018, and by February 7th, he was responding to a multitude of users that were saying the article vanished, by linking to his own website, stating “Thanks so much!!  Here is the new home for the piece http://www.PoliticalVanguard.com . http://politicalvanguard.com/biased-fbi-and-doj-officials-broke-the-law-and-tried-to-decide-the-election-an-annotated-timeline/ …. PLS Share.”

The article is so detailed and sourced with hyperlinks to his assertions, showing the deep rot within the FBI and DOJ that attempted to subvert the will of the American people using their positions of power to clear Hillary Clinton of criminal charges in her private email server and sharing classified information on the unsecured server, while framing Donald Trump for the “Russian collusion” narrative, that high profile members of the media, such as chief political columnist of Politico Roger Simon, called it an “ABSOLUTE MUST READ>  Best overall analysis of FBI/DOJ scandal so far with timeline,” and Glenn Reynolds from InstaPundit highlighted it, with other Twitter users referring to the piece by saying “great to see journalism is not completely dead,” and many, many more complimentary comments about it.

It truly is a must-read for all the information, laid out via a timeline, showing the insidious corruption within the Obama administration, the Clinton campaign and senior members of the FBI/DOJ, so it is highly recommended to read the entire piece, but the question here, is why did Forbes delete a piece that was garnering so much public attention, that was well sourced, providing their audience with a facts the liberal mainstream media will not report on?

Forbes offers the standard disclaimer on the original, now deleted article, as can be seen on the archived and cached version taken from the Forbes site, which states “Opinions expressed by Forbes Contributors are their own,” so from a business standpoint, deleting the article without explanation, makes no business sense, as it was bringing in ad revenue. It is sourced with both liberal media links like The Politico, CNN, CBS News, New York Times, and NPR, and with conservative media links like Fox News, National Review and Washington Examiner, along with source links to Real Clear Politics and The Hill, which offer more balance.

The conclusions offered after the outstanding timeline are the writer’s opinion of the events he documented, but the very definition of an op-ed is “opinion editorial,” so the Forbes disclaimer reflects those opinions are those of the writer, so we have to wonder who forced Forbes to remove the article, one that was highly praised by a number of people, readers and professional writers and commentators alike?

Previous examples of Forbes deleting articles show conclusively that Forbes does allow the publication to be intimidated by other entities, such as Google, as shown in a September 2017 article at Boing Boing, titled “Forbes removed article critical of Google after it asked nastily.”

After the meeting, I approached Google’s public relations team …The press office confirmed it, though they preferred to say the Plus button “influences the ranking.” They didn’t deny what their sales people told me: If you don’t feature the +1 button, your stories will be harder to find with Google. …

Google never challenged the accuracy of the reporting. Instead, a Google spokesperson told me that I needed to unpublish the story because the meeting had been confidential, and the information discussed there had been subject to a non-disclosure agreement between Google and Forbes. (I had signed no such agreement, hadn’t been told the meeting was confidential, and had identified myself as a journalist.)

It escalated quickly from there. I was told by my higher-ups at Forbes that Google representatives called them saying that the article was problematic and had to come down. The implication was that it might have consequences for Forbes, a troubling possibility given how much traffic came through Google searches and Google News.

Forbes’ Terms of Service do state that “Forbes reserves the right to delete, move or edit any submission at any time, for any reason or in its discretion, but has no obligation to review or remove any such content,” but that does not explain why this specific piece was removed, which was generating a much-needed conversation via social media and other platforms, about the abuses conducted by corrupt individuals within the Obama administration and high level officials within the FBI and DOJ, which is all public knowledge now as multiple investigations are uncovering more and more every day.

Del Beccaro’s bottom line conclusions after detailing the timeline of events that occurred from 2015 up until after the 2016 presidential election, clearly shows why certain entities did not want this article to remain up, as he explains what the timeline of events indicates to him about how the Hillary Clinton investigation was rigged, how senior members of the FBI created the “insurance policy” to damage an incoming president with the “Russian collusion” storyline, and how those and other top level intelligence community officials used unverified information to obtain FISA warrants, where Del Beccaro ends his conclusions with the following statements:

Watergate did not involve the DOJ and the FBI – two institutions which must be non-partisans for this Republic of ours.

This case does involve the FBI and DOJ. It also is foolish not to assume that Loretta Lynch and President Obama were ignorant of the goings on – if not involved in them.

Finally, the dishonest investigation of Hillary who committed actual crimes should not be acceptable. Nor should FBI or DOJ officials be allowed to alter events and Court proceedings for political purposes.

If we let this go, and people are not brought to justice, we will have forever damaged our Republic and the World’s view of us as a nation of laws.

That ladies and gentlemen is the problem, the deep state can’t have an established  member of the liberal media, demanding justice for the corruption during the Obama administration and the crooked members of the deep state itself within the intelligence community, because then they cannot label the Independent Media as “conspiracy theorists” for highlighting and demanding the same thing.

While not right, it is understandable if the big tech companies go after smaller Independent Media sites, sometimes there is no choice but to comply if something violates terms of service, such as missing videos, which Google will then claim since it is no longer available the publisher is “misleading” the public by referencing it in an article, when generally it was Google’s video platform YouTube that deleted the video to begin with.

Those are the games big tech play to force compliance when a smaller website refuses to toe the “official narrative” line and goes against Google’s ideology, but Forbes has been around since 1917, it is an established household name, so removing such an important article about ongoing events within our own intelligence communities, showing corruption within the highest level of the U.S. government, with absolutely no explanation, is unacceptable.