In this new story over at Mashable that the Drudge Report linked to on Friday, they report Donald Trump Jr. of all people is accusing the anti-free speech platform Twitter of censoring his tweets with an Instagram post Thursday that included the hashtags: #obamacare, #censored, #twitter, #freespeech and #thought. After Trump Jr. had tweeted a Drudge tweet linking to this Bloomberg story on Aetna getting out of Obamacare exchanges, Trump Jr’s own wife saw the tweet partially censored as ‘potentially sensitive content’ as seen in the screenshot below.

Just the latest proof that a massive crackdown is well underway upon free speech at the very highest (and lowest) levels of social media and within government and society as very real attempts are made to see that history is ‘erased’, we take a look in this story at a new video from Sgt Report that proves to us something very sinister and quite nefarious is going on in America and the free world. As ‘the ministry of truth’ attempts to impose more and more restrictions upon our rights to speak as ‘free humanity’, we see the ‘war upon truth tellers’ continues unabated while those pushing ‘Lucifer’ are rewarded. First, Trump Jr’s instagram post.

donaldjtrumpjr Amazing. The top tweet is on my feed and the bottom one is the same tweet as seen from my wife’s feed 7 minutes later. I don’t think there is anything remotely controversial or offensive about the truth here and yet it seems @twitter decided to at least partially censor the tweet. Some people saw it as it sits and yet for others it showed up as not available. Numerous followers pointed out the same thing to me. Is this actually happening to others as well?

Are the executives or algorithms deciding what is and isn’t appropriate and actually suppressing or minimizing the potential impact of thought? Considering how benign this is compared to some of the other stuff I see on twitter it’s shocking that this could be singled out as somehow offensive, but I guess the failure of #obamacare doesn’t fit the narrative of Silicon Valley. #censored #twitter #freespeech #thought 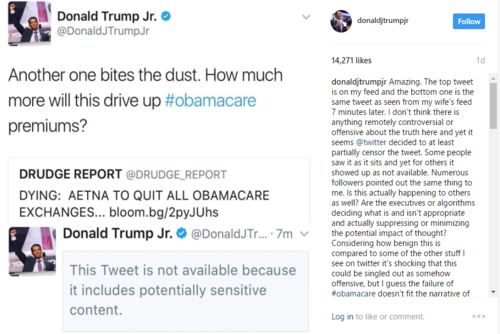 In the first video below, videographer Sgt Report gives us a history lesson that many people may not know but is imperative to understand as he takes his video forward. Playing for us a video of Canadian Prime Minister Justin Trudeau taking his ‘oath of office’, we notice immediately that he swears his and his country’s allegiance to the Queen of England.

As we learn, the Queen of England is the largest sole owner of land in the entire world, owning not only all of England but all of Canada and Australia as well. While ‘land owners‘ in one of those countries might THINK they own the land they’re purchased because they’re living upon it, they don’t, the Queen of England OWNS the land their homes were built upon. Proving to us that Trudeau and all Canadians, Australians and British are just ‘servants to the crown’, our videographer shows how these same fascist forces are attempting to silence the truth by waging a war upon independent media that has its very roots in the same ‘Silicon Valley machine’ Trump Jr. was just warning us about. 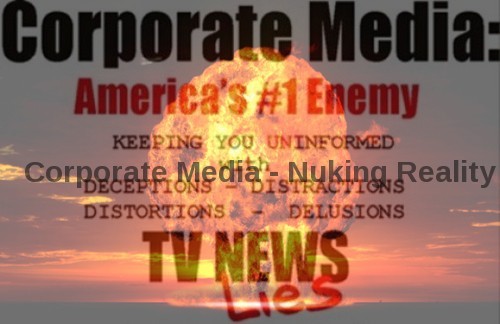 While globalist mega-corporations are happy to run their advertisement’s and financially back shows such as the ‘cannibal-comedy’ “Santa Clarita Diet” or the so-called hit tv show “Lucifer”, the same globalist, America-hating corporations are ‘hands off’ when it comes to advertising upon ‘real news’ websites covering globalist censored topics such as chemtrails, ‘conspiracy theory’ or Hillary Clinton. While happy to back CNN, MSNBC, and the Washington Post, one advertiser specifically told ANP they won’t run their ads upon stories reporting upon terrorism, disasters or war.

In other words, advertisers wanted nothing to do with anything having to do with ‘real news’. Yet we were also told that the ‘best performing news stories‘ are stories that had to do with celebrity gossip.

So, we get more proof that America is consumed by ‘Holly-whores’ and satan’s endless series of distractions and the mainstream media and the corporate globalists are more than happy to continue supporting such trash financially and pushing it into our faces while neglecting ‘real’ news. When was the last time we saw a real, investigative journalism story on chemtrails from CNN, MSNBC and the corporate media that’s happy to push globalist propaganda into our faces? 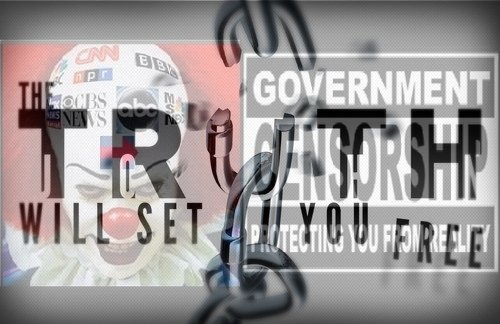 As Susan Duclos reported back on May 9th in this story on ANP, the war upon independent media rages on and with the globalists attempting to ‘kill off’ websites offering ‘opposing views’ to the globalist narrative, we also see in several comments left on Trump Jr’s Instagram post that this war stretches much further, turning into a war upon all ‘conservative thought’. It’s all ‘politics’.:

carrie.dom: How much longer until they censor potus tweets?

misstracyrenae: They suspended my Twitter. Only thing I could think of was I’m pro-Trump, pro-military, pro-life–pretty much everything the left despises.

steven.berghmaybe: time to start another twitter or IG where we have freedom of speech???

informed_patriot @donaldjtrumpjr: thank God brother that you see this censorship so you can show Dad /Mr President what’s going on. without you I’m afraid he may not notice .. I’ve been watching this happen through the entire campaign election always leaning to the left on the algorithms.. Instagram censoring free speech and obviously it’s narrative is against true American Patriots and the Constitution of the United States.

informed_patriot@realdonaldtrump: I wish we could do something about this abusive AI algorithm system which is clearly pushing the opposite narrative of what we stand for as Americans 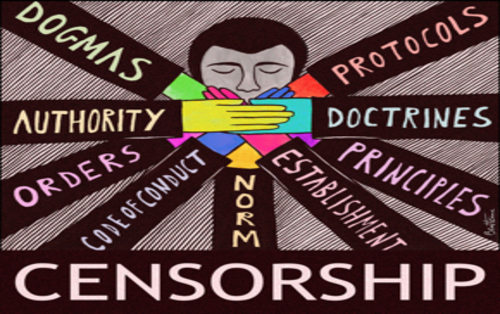 Why have websites such as Facebook, Twitter and YouTube gone ‘all in’ on censorship, seemingly playing the roles of ‘silent enforcer’ and ‘gatekeeper’ for tyranny, blocking important information from being seen by instituting desperate algorithms that stand against what most Americans stand for?

As we read in this new story from Mike Adams at Natural News as also heard in the 2nd video below in an interview with Sgt Report, a tremendous amount of effort is being put into ‘taking down’ those websites offering alternative thoughts and ideas, with videos containing important, alternative information being ‘demonetized’ and moves being made on many different levels to ‘snuff out’ alternative, conservative thoughts and information. Fortunately for free speech and humanity, as Susan also reported, people within the independent media such as Mike Adams have become true champions of the 1st Amendment, going so far as to purchase ad space on websites such as ANP and several others that are being censored.

We also see this ‘war upon free speech’ and conservative thought ongoing upon college campuses all across America as conservatives are ridiculed and attacked simply for their political beliefs.

Will Donald Trump Jr. help get the message to President Trump about what we’ve been witnessing and reporting upon, this all-out onslaught and war upon Conservative and independent media and thought? As Trump Jr states, “considering how benign this is compared to some of the other stuff I see on twitter, it’s shocking that this could be singled out as somehow offensive”, it’s clear that ‘thought’ that doesn’t go along with the ‘status quo’ is now considered ‘dangerous’ and something to be censored, even if that ‘thought’ is from the son of the President of the United States.