No, I’m not talking about the marriage of Slick Willy Clinton and the Witch, although that certainly qualifies. I’m talking about the unholy alliance of the New World Order (NWO) elites and the Muslims. It seems that almost daily we hear of monstrous (and pointless) acts of terrorism committed by adherents of the “religion of peace”: bombings, knife attacks and beheadings, acid thrown in women’s faces, etc.

Between these acts our Muslim brethren busy themselves with “honor killings” of their wives and daughters and by committing most of the street crime in Western Europe and a good deal of the crime here in the US. Of all the world’s major religions…Christianity, Judaism, Hinduism, Buddhism, and Islam…only one, Islam, is continually at war with all the others. And consider that murdering “infidels” is not even an effective way to win converts; the Muslims torture, maim, and kill because they enjoy it and their religion specifically calls for it.

When is the last time you ever saw a mob of Jews or Christians jumping up and down in the streets, waving their arms in the air, and screaming out their hatred for everyone else? Never, that’s when, but the Muslims, when not otherwise occupied (see above) spend a lot of time screaming in the streets, their faces so contorted by hatred for people they have never met and who have never harmed them that some of them no longer appear human.

And yet our glorious leaders simply adore these cowardly thugs and murderers. They have literally been invited into the Western nations, including the US and Canada, and often given (as by Hussein Obama) high security clearances and sensitive government jobs. While Christians are increasingly persecuted, Muslims are treated as sacred cows; any criticism of them, no matter how well founded, is condemned as “hate speech,” “Islamophobia,” and “racism.” 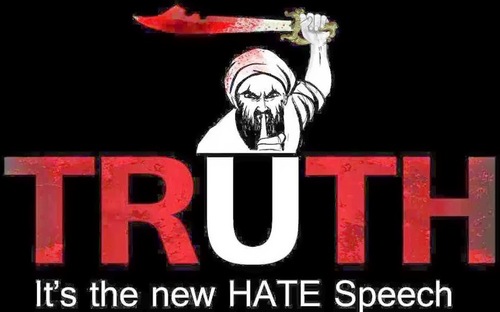 Remember that “hate speech” is any speech the elites hate (and they hate truth); “racism” is their go-to designated conversation stopper when anyone questions the party line…never mind that Islam is not a race. As for “Islamophobia,” why shouldn’t people fear those who would butcher them? Some of us have gone far beyond fear and are beginning to harbor a deadly hatred for our tormentors. In England and on the Continent citizens have been jailed for complaining about Islamic crime and terrorism. Germany’s head witch, Frau Merkel, has set about the deliberate destruction of Western Civilization by inviting in the invading army.

Perhaps a brief review of the history of Islam and the history of our own would-be masters will shed some light on this very dark subject. Islam is the only one of the world’s religions founded by a child rapist and mass murderer…contrast that with what we are told of Moses, Jesus, and Buddha. Mohammed was born around 570 A.D. in Mecca, in Saudi Arabia, where dwelled Christians, Jews, and assorted pagans. He claimed that he often prayed alone in a cave, and there he was visited by the archangel Gabriel…but since when do heavenly angels hang out in caves?

I suspect that if Muhammed did not simply invent a religion that he thought would “sell” by cobbling together elements of other religions he may have been visited, not by Gabriel, but by a very different sort of “angel.” In 610 he claimed that God had sent him a message, and he began preaching. In 622 he and his followers moved to Medina, where he married his second wife when she was nine years old, and when the Jews in Medina refused to convert and follow him, he massacred all the men and sold the surviving women and children into slavery. As you can see, not much has changed.

In the following centuries Islam spread widely in the Near East, North Africa, parts of sub-Saharan Africa, southern Asia, and even southern Europe. In Europe, the Franks finally stopped the Muslims in what is now France, and by 1492 the Christians had driven them out of Spain. Yet in the next century the Muslim Ottoman Turks advanced as far as Vienna before being driven back. In western Asia, the Muslim warlord Timur the Lame killed perhaps 17 million people in his wars of conquest against the infidels, destroying entire cities and irrigation systems, building pyramids of human skulls, and leaving much of the region a wasteland for centuries to come. 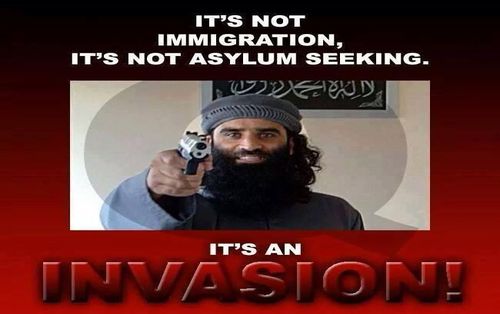 The Muslim conquest of India, although it took over a century, is believed to have killed more people than WWII, and many of these were noncombatants massacred by the Muslims. The Muslims pioneered the trade in Black African slaves, but also enslaved up to a million Europeans, raiding coastal towns and taking the people away to a slow death as galley slaves; even those “lucky” enough to work on land died of hunger and maltreatment. America’s first foreign war was against these very North African slave hunters, then known as the Barbary pirates. In the early nineteen hundreds it was the Ottoman Turks who kicked off the genocide that characterized much of the twentieth century. They massacred between one and three million people, mostly Armenian Christians.

Our own would-be masters, the NWO elites, appear to have originated with the ancient mystery cults, which resurfaced in 1099 as the nominally Christian Knights of Malta (originally known as the Knights Hospitaller), and, in 1119, the Knights Templar. The Templars, in particular, during various truces, had secret dealings with the Muslims, but there is little hard evidence of what really took place. After the Templars were supposedly wiped out by the French King Philip, they resurfaced as the “Knights of Christ” in Spain and Portugal.

In the seventeenth century in Germany and then in England there appeared a group known as the Rosicrucians, using many of the same pagan magic symbols used by the Templars. They claimed to have been founded by one “Christian Rosenkreutz,” but the name is simply a play on “rosy cross,” the name of the order. He allegedly had travelled in the Near East and studied with the Muslims, especially the Muslim mystics known as Sufis (Timur the Lame was also allegedly a Sufi). So, again, we have a shadowy Islamic connection but little hard information. Later in the seventeenth century the first Freemasons surfaced in Scotland and England, espousing doctrines similar to those of the Rosicrucians, and using the same ancient magic symbols.

Then, on May first, 1776, a Bavarian law professor in Ingolstadt, Adam Weishaupt, founded the Illuminati. They were supposedly outlawed and broken up in Bavaria, but not before playing a role in the French Revolution, arguably the first example of true fascism in modern times. In 1832 William Huntington Russell and Alonso Taft, prominent Americans studying in Germany, brought to the US chapter 322 of an unnamed German secret order. Chapter 322 is known today as Skull and Bones, and its members are among the wealthiest and most influential people in the US. In 1836 German workers who had immigrated to Paris started an organization known as the League of the Just, espousing communist doctrines; it was they who backed Karl Marx. 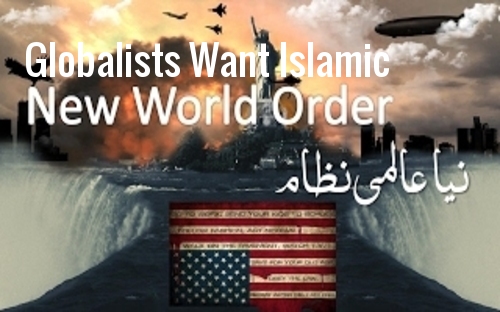 And it is noteworthy that Adam Weishaupt used the code name “Spartacus,” and communists in early twentieth century Germany called themselves “Spartacists.” And May first is Beltane, a pagan holiday now celebrated by the communists. Not only the communists, but also the Nazis can trace their lineage to these shadowy occult groups. Early in the twentieth century there surfaced in Germany and elsewhere a group calling themselves the Order of the New Templars, which more or less morphed into the German Order and then the Thule and Vril Societies, who created the Nazi Party. Either the Illuminati have lived on (and may have originated long before Weishaupt came on the scene) or the Illuminati were merely part of a larger pattern.

There is no clear evidence of an alliance between the Muslims and the fascists of the West until just before WWII. In 1921 the British controlled the Palestine Mandate, established by the League of Nations (the first attempt at a one world dictatorship). That year the British High Commissioner for Palestine appointed Amin al-Hussein as Grand Mufti of Jerusalem. He was a fanatical anti-Semite, and when Hitler came to power the Nazis established close relations with him and the Muslims he influenced. Many Muslims fought on the side of the Nazis in WWII, and it was the Grand Mufti who opposed the Nazis’ original plan to resettle Jews in Palestine and urged Hitler to exterminate all of them. After Hitler’s defeat, during the Cold War, the Soviets supported Islamic terrorism and armed Egypt and other Muslim countries.

So, prior to that, we have only shadowy hints of a real connection between the Muslims and the NWO crowd. The Shriners are high level Masons who dress up like Arabs, but it appears that their order, established in the USA in 1870, is really something of a joke. Remember, in 1870 the Muslim nations were too poor to pose any real threat, and few Muslims lived in the West. They were not taken seriously. 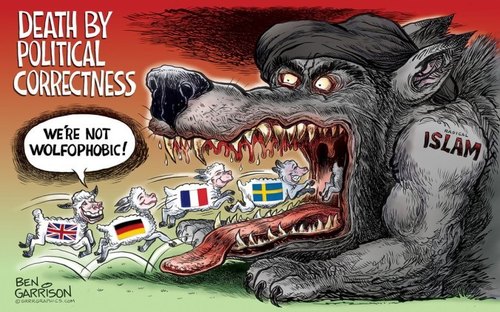 Yet today the Muslims are one of the three divisions of what I call the Army of Darkness; the second division is comprised of the fascists of the left (the only kind that exist); and the third division is made up of common criminals, including street thugs, gangs, and drug cartels. The fascists take their orders from the elites and they enable the other two divisions…it is always leftists who are sympathetic to Muslims and glorify street criminals. But, considering that Islam is really nothing more than rather thinly disguised Satanism, and the same appears to be true of the cults to which the elites in the West belong, it is obvious that they were all inspired by the same ancient enemy.

First video below from Stefan Molyneux is titled ‘Former Muslim Speaks Out’ – from the video description.:

Question: “I’m an ex-muslim middle eastern immigrant, I’ve noticed a lot of parallels in the rise of tyranny back home and the rise of tyranny in the west. Obviously, as I chose to be in the west now, this concerns me but not for my own sake. After attempting to relate these thoughts with others, whether those back home or my new neighbours, people are often skeptical of my observations. Despite watching things regress in the last few years to an obvious, almost painful, degree I feel like my observations are only getting more validated despite not earning legitimacy in the public sphere. A big aspect of this is having both the left and the right perceiving me as the other, the far right viewing me no different from those that seek to destroy the west and the far left viewing me no different than those that seek to discriminate against muslims, how do I reconcile this and earn my place in this shaky society? Is there no more room for nuance?”

“Over this time I’ve also come to realize the importance of balancing tradition but maintaining an open mind and I think both forms of societies have pros and cons. How can we redirect the conversation from eliminating the other side into synthesizing? The biggest catastrophe that has hit the west since WW2 in my estimation is the death of (and on-going war on) the family and it genuinely sadness me, on the other hand things are far too rigid back home and the concept of family can almost be suffocating.”

The Kalergi Plan and White Genocide In Europe